This has led one cryptocurrency analyst to note that the S&P 500 could determine Bitcoin’s future, with BTC flashing some tempered signs of weakness that could lead it to see a significant downtrend if the benchmark index is unable to push higher.

This notion is support by data regarding the cryptocurrency’s realized correlation with the S&P 500, which has grown significantly throughout the past few days.

Between late-March and early-April Bitcoin showed signs of breaking its close correlation to the U.S. equities market, with the cryptocurrency rallying nearly 100% from its year-to-date lows while equities only posted a tempered recovery.

This decoupling – although bullish at the time – is now showing some signs of reverting, as data from Skew seems to indicate that the crypto is once again growing increasingly correlated with the S&P 500. 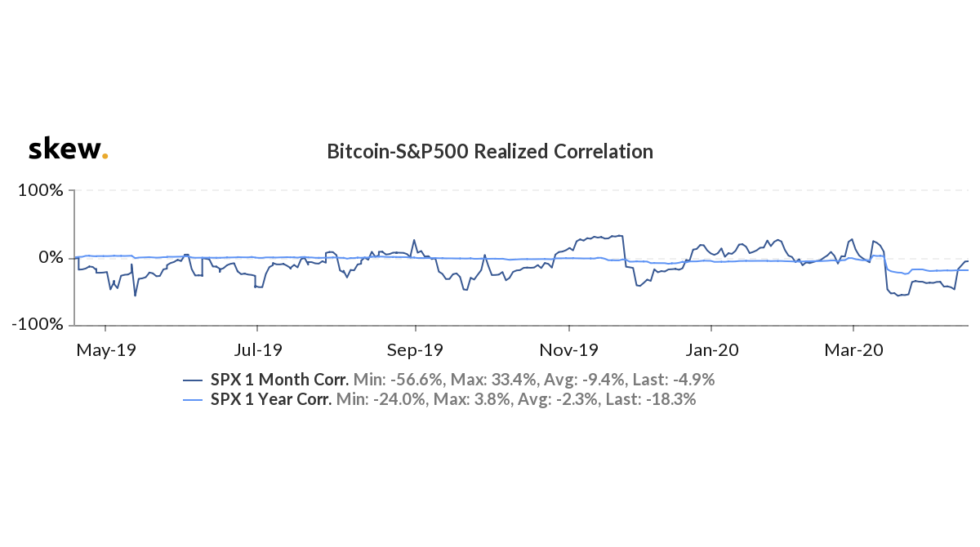 The above chart shows that the realized correlation between the two assets is growing after a slight period of decoupling seen throughout March and in the first few days of April.

Traditional markets, much like Bitcoin, are currently caught within a bought of sideways trading as investors weigh the impacts of the COVID-19 pandemic with the immense economic stimulus initiatives that have been undertaken by the Fed and government.

This growing correlation between Bitcoin and the S&P 500 comes as one popular analyst notes that the crypto’s future may rest primarily on where the index trends next.

He explains that BTC is showing some signs of weakness currently, and a failure for the S&P 500 to continue pushing higher could spark a capitulatory selloff.

If this sentiment proves to be valid, it could further damage the “safe haven narrative” that many investors have subscribed to, also potentially further weakening Bitcoin’s macro market structure’s strength.

The Swedish Enforcement Authority, Kronofogden, is once again auctioning off cryptocurrency that has been allotted for public sale. The online auction, which is the second of this kind the government agency conducts, starts on Friday, […]

Fidelity Investments is expanding its crypto services to European clients after seeing increasing potential in this market. The expansion builds upon the company’s U.S. crypto business. “We’ve seen significant interest and engagement by the institutional […]

As Bitcoin (BTC) enters another bull-and-bear fight, ranging between $7,800 and $8,000, crypto Twitter traders are warming up to a bullish attitude. Leading Twitter Accounts See Potential for Bitcoin Earnings on Bullish Moves Leading social […]